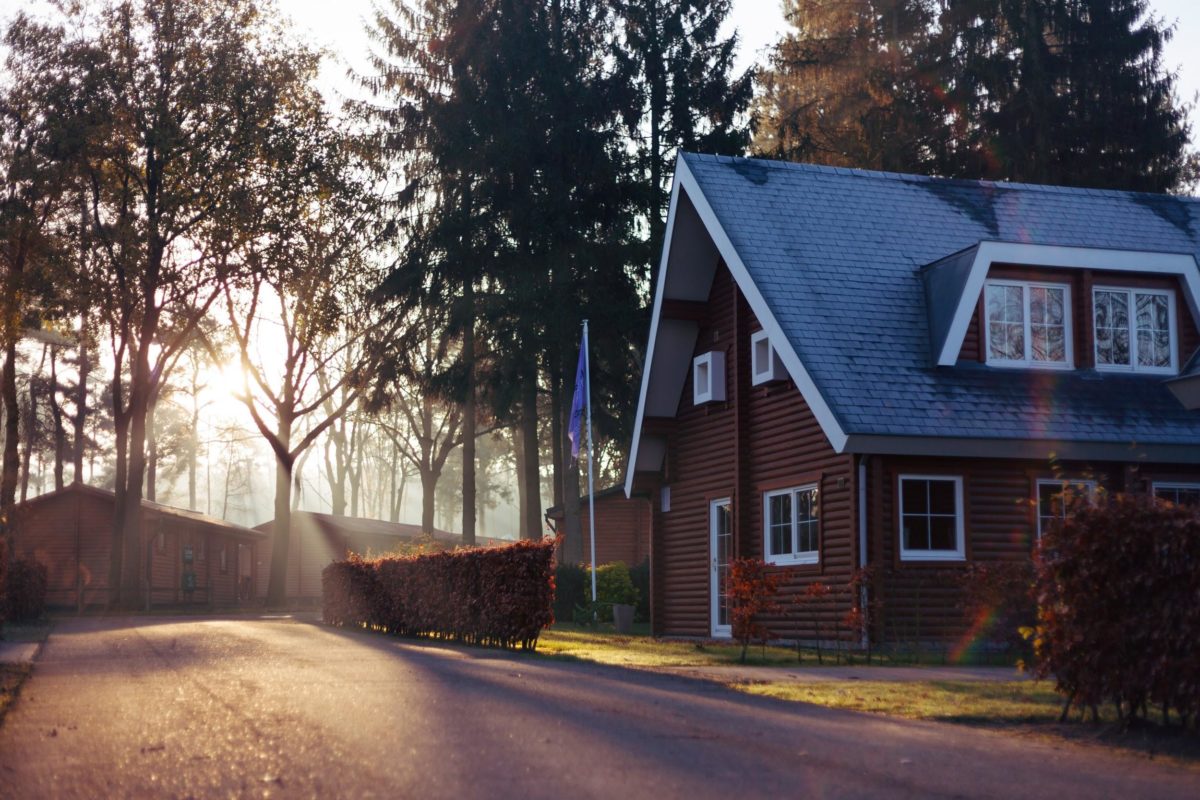 Supposedly you have read this article here, where we dive deep, showing you the difference between having a home build by custom home builders and buying an already built one.

Are you still torn between which type of house might be the best for you and your family?

Let’s introduce you to:

They faced a classic dilemma that most families face when deciding to buy a house:

✔  should you buy real estate or a custom-built house?

Leah and Alexander have been renters for most of their married life.

But things were about to change as they welcomed their latest addition to the family.

A looming decision tolls above their heads.

Move out and get into a new home … Fast!

Here’s how their story went.

When we first moved to Saskatoon, it was just three of us.

Leah and I used to live in an apartment in Vancouver, an apartment we had been renting since our college days.

It was a nice place with one bedroom. So we managed to save up some money every month since he was just a baby and didn’t take so much space.

Ethan had just turned one when Leah got a promotion at her job!

My wife’s boss told her she’d have to move to Saskatoon for the job, so we packed our things and walked out.

On the other hand…

We were used to living in one-bedroom apartments.

We decided to rent an apartment. It was near Leah’s work as living costs were more affordable in Saskatoon than in Vancouver.

But wait, let me tell you something.

Everything changed when we found out that my wife Leah was pregnant with our second child.

✔  moving to a two-bedroom apartment

✔  because landlords won’t allow it since it’s against the law.

Suddenly it came to this:

Paying for a two-bedroom place would have been the same as getting a house in Saskatoon.

So, we decided that it was about time we moved into a house instead.

We had money in the bank. We only needed to find a house to buy.

It was easier said than done, though!

We hired a realtor, and she showed us plenty of real estate houses all over Saskatoon.

But none caught our attention.

Leah and I had some things in mind, and we wanted to find a house that would fit into our preferences.

But with no such luck.

After months of looking for the perfect house, Leah’s due date was fast approaching.

Out of options: They didn’t know there was an alternative!

After months of searching, we were starting to get frustrated with the lack of choices available in the market.

Alex works as an analyst. So he chose to work from home.

So, we needed space for a home office, and for Ethan to play.

Daycares cost money, so minding him at home was the more affordable option.

Alex couldn’t concentrate on work like he used to. It was too noisy.

We began to feel desperate, trying to buy real estate.

…a work colleague told us about their adventure with a house building company!

It was just on time.

We had no idea what a custom-built house was as we’ve only heard about buying real estate.

Intrigued by our friend’s beautiful home, we decided to look for custom-home builders in Saskatoon together.

It was then that we only started doing our research about custom-built houses online.

In my own experience:

Everything looked so pristine and well-made.

It was easier going thorough discussions about the advantages and disadvantages of purchasing this type of house instead of buying real estate.

Though it seemed like a rather attractive option for first-time homeowners, Alex and I were slightly apprehensive about an essential factor: time.

But looking back, it was worth the wait.

Want to learn why? Keep reading.

The most important call of their lives

Their representative soothed our worries about the timeframe of the construction.

We were charmed by the benefits of owning a custom-built house.

You can’t believe what a relief it was to customize and decide exactly what our house would look like.

Do I need to mention that it was impossible when we were trying to buy real estate?

And that’s just one side of the story…

Aside from that, the house building company told us about the governmental programs that supported home-buyers, especially first-time homeowners like us!

Alex and I gave the representative a call back to let her know about our decision – we chose to have our custom-home built.

•  The kids would each have their bedrooms, spacious play area

•  Alex would have his home office

•  and I would finally have the kitchen I had always dreamed of!

From dream to reality

We met with the developer we hired, and he started the process by discussing some legal matters, such as:

•  letting us know what our rights were

•  and what his responsibilities were.

We covered as many topics in the contract as possible. Then the developer talked about the timeframe of the construction.

Time had been our primary concern.

It was a sensitive topic.

How long would it take until our house would be ready before we’d finally become first-time homeowners?

The developer said it could take any time between at least 3 to 4 months or at most 6 months for them to finishour house.

It seemed like a lot of time, but we were okay with it.

The dream house was close.

We’d spend another 3 months in an apartment, but we were more than ready to add the newest addition to the family for the rest of our lives!

The second step in our process of developing our custom-built home was designing the floor plan.

We had lots of preferences regarding what we wanted in our new house.

That way, the first couple of meetings were essential for us to let the developer know exactly how we wanted our house to be like.

We told him that the spaces we needed in a two-story house were 3 bedrooms, 3 bathrooms, an office, and an open space kitchen.

The developer took notes of our preferences and presented us with a tentative floor plan a few days later.

We requested some changes, such as the kitchen/living room/dining room disposition.

But we were utterly happy with the floor plan he suggested initially.

Although we had signed an initial contract, the price of our custom-built house hadn’t been set in stone yet.

The developer informed us that the price would vary depending on:

•  The materials we picked.

•  The size of the house and other things.

•  For instance, we had initially told the developer that we wanted the house to have tile flooring, so he calculated the price of the flooring based on the material we picked.

However, when he showed us how much it’d cost, Alex and I immediately noticed how it was way over our budget.

But here’s the kicker:

We picked another less expensive material, and, luckily, the estimated price lowered significantly after that!

It was nice knowing that we had some control over our expenses in the construction.

After we agreed on a final floor plan, the construction began.

But we were a bit worried.

We had read that choosing a custom-home builder could be quite stressful.

Why may you ask?

We thought that we had to check on the progress of the construction constantly.

Or take a great deal of time to pick out everything in the house… from the color of the walls to the doorknob type.

The builders that we picked in Saskatoon were really responsible.

Their team was very hard-working and dedicated, so we weren’t stressed out at all!

The development has kept us in suspense.

Not only were we eager to leave the cramped apartment, we lived in…

…but the four of us were also extremely anxious to see the final result.

We faced no major troubles during the construction, and that was a plus for us!

Finishing with the last touch

Once we finished our custom-built house, the custom home builder set up a meeting with us, and we drove over to our house.

It was time to:

•  inspect the interior and exterior

•  check if there was anything different than expected

We scrutinized every detail in every single room, and we were genuinely pleased with what we were seeing.

Want to know the best part?

The kids’ rooms looked perfect with the details and wallpaper they chose.

Alex’s office was amazing as well as functional.

And my kitchen? I felt very peaceful and grateful to have such a kitchen.

The developer and his team were true professionals all throughout the process and their high-quality work was definitely reflected in our house.

Did we have any complaints?

We didn’t have any. And we still don’t.

It’s been an incredible 5 years now since we moved.

With no issues related to maintenance yet!

And to say the least…

Thanks to the combination of high-quality material and top-notch workmanship, our house still looks like it was built yesterday!

The children have grown fond of their bedrooms.

Alex feels comfortable in his work environment, and I love spending time in my kitchen!

We know, for sure, that we made the right choice when we decided to work with an affordable home builder.

Curious who developed this family’s house?

This couple chose to work with Green Villas, a notable home builder currently operating in Saskatoon, Saskatchewan, that has completed several successful projects over the past 10 years, establishing harmonious and long-lasting relationships with their clients and so much more.

Which acknowledges Green Villas‘ outstanding workmanship in the development of new custom-built houses as it specializes in developing high-quality residential and commercial buildings.

Like the couple’s satisfaction with their custom-built home, you too can become a first-time homeowner yourself.

How can do that?

You can get in contact with Green Villas by filling out the form or by calling the number available here.

For further information, you can also check their portfolio and see their past projects that include custom-built houses and commercial buildings!

Now, if you’re in the Saskatchewan region, you can book a free consultation and visit their Saskatoon office at the following address: 215-2750 Faithfull Ave, Saskatoon, SK S7K 6M6.